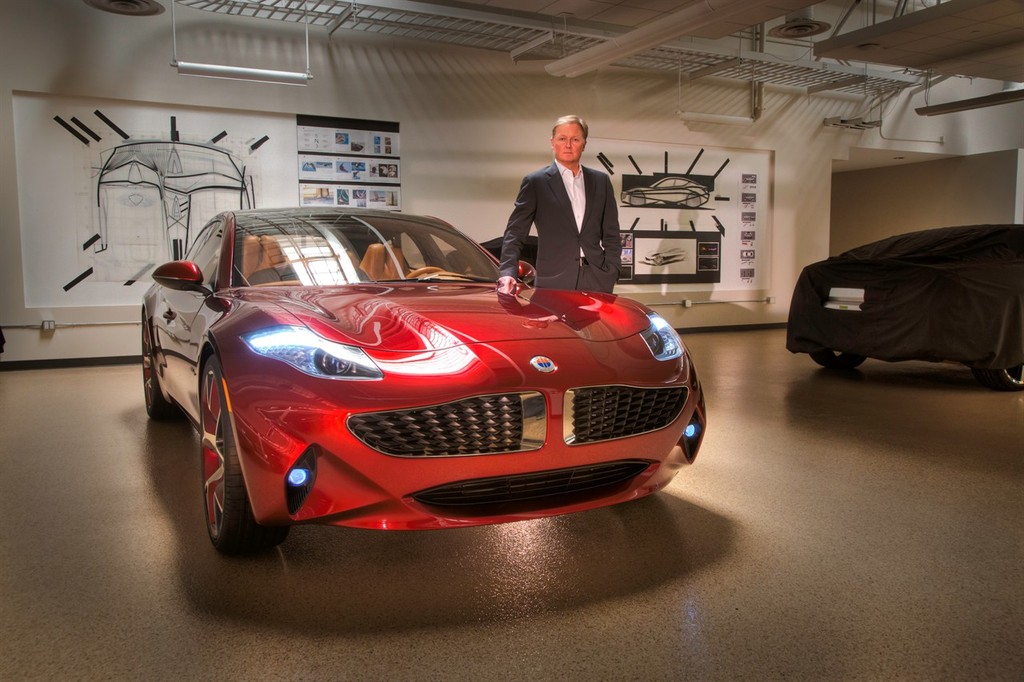 As Fisker came up for his DOE loan under the department of Energy Advanced Technology vehicle manufacturing loan program created in 2008 with a fund of $25 billion authorized under section 136 of the Energy Independence and Security Act of 2007, to reduce dependence on foreign oil. The Bush administration initially signed the program into law but the program has become a hot button topic. Innovation and development of new technology should be cheered. Fisker was to get funds to build the vehicle in the picture above at a former GM plant in Delaware where now defunct brands Pontiac and Saturn used to manufacture the Sky and the Solstice. Those plans are currently on hold as the politics sorts itself out pending this election however I thought it great to share my exclusive interview with the energetic innovator. I am also presenting some video of our interview.

Necessity breeds ingenuity for most, while others can perceive an

opportunity and voyage towards it before the masses are in tow. Such

is the case of distinguished automotive designer Henry Fisker whose

has undisputedly been regarded as second to none. Henry Fisker has now

approach may change the automotive industry. Fisker Automotive is

truly a global car company with headquarters in Irvine, CA, a

development studio in Detroit, an engine building alliance with GM for

their global Echotec I-4 engine, and a manufacturing agreement with

Valmet Automotive in Finland. Of the overall strategy of the company

Henry stated "green cars can be good looking sexy, fast, and big… its

important to make a statement about getting a green car that's

it" and one glance at the Karma and you would concur with his vision.

Simply stunning to look at the Karma features flowing lines, an

Apartment…with 4 single seats, with a long battery from front to

rear." Of the structure Henry told us its an " aluminum body, lighter

specs on the electric powertrain are just mind numbing a 408hp

combined output with 959 ft-lb of torque. The Karma works on a

mode. There are 3 modes HEV, Stealth, and Sport. Stealth mode is the

speed to 95 mph, and reducing acceleration while as charging the

battery automatically, HEV mode serves to charge the battery, with

full performance possibilities offering peak power and torque, all at

a tock of a button. Priced at $87,000 the Karma is very competitive

others. Manufacturer Valmet assembled the Porshe Cayman, and Boxster

high. In addition it doesn't hurt to have a Nobel prize winning,

former Vice President as an investor, AL Gore a partner in Kleiner an

second round of financing for Fisker. Fisker plans to sell 15,000

Karma's a year beginning in the 4th quarter of 2009, there are also

plans for other product lines with Karma derivates to follow after

launch. In conclusion a statement by Henry Fisker sums it up the best

"Karma" we expect nothing but great Karma for Fisker. For more

The information about the interview you shared is very good. Thanks for sharing this information.

DE Shaw, Saba Capital and others in line for windfall on deal with former US president’s newly launched outlet

Zuckerberg turns to the internet’s future to help the company

Back at the start of the year, Google gave Meet hosts the ability to mute everyone in a call all at once. Now, the company has a solution for situations that require more nuance and control. It’s introducing an audio and video lock feature that allows hosts to turn off the microphones and cameras of select participants, in which case they can’t turn them back on until they’re allowed to do so again.

Anyone using a version of Meet on Android or iOS that does not support audio and video locks will be removed from the call if the host enables the feature. If they try to join one such call, they’ll also be prompted to update their app. Google has begun rolling out the tool to rapid release domains today. Scheduled release domains will start getting access to it beginning on November 1st. The locks should be particularly useful for corraling rowdy participants, but some hosts may also find it helpful for encouraging specific individuals to participate more often.

The redesigned MacBook Pro might be more powerful than you think, provided you have the right configuration. Apple has confirmed to Engadget and MacRumors that the 16-inch MacBook Pro with an M1 Max chip can invoke a previously hinted-at "High Power Mode." While the company was shy on details, macOS Monterey beta code suggested the mode would "optimize performance" for demanding tasks in return for the possibility of more fan noise.

This could be frustrating if you buy either the 14-inch MacBook Pro or a 16-inch system with the M1 Pro. This isn't surprising, though. Features like this by their nature drive up power consumption and heat, and Apple may want to make sure there's enough battery and thermal headroom (that is, a larger enclosure). The M1 Max is also a better fit for a mode like this than the M1 Pro — there's simply more performance to unlock.

If you do buy a higher-end MacBook Pro, though, this could be particularly helpful. Many pro users have moments when they need performance at all costs, such as a hurried video export or last-minute code compile. High Power Mode might help finish those tasks on time while putting a ceiling on noise in most situations.

Less than a year after it first started testing live audio rooms, Twitter is opening up Spaces to nearly everyone. Starting today, anyone on Android and iOS can host a Space, no matter how many people follow them. As of this past May, the feature was open to any Twitter user with more than 600 followers. At the time, the company said it put that limit in place to ensure a “good experience.” Now that the option is available to all Android and iOS users, you can start your own audio room by tapping on the compose button and then the Spaces icon.

One more mic check...the option to host a Space is now rolling out to everyone on Android and iOS!

If there’s a reason Twitter waited almost a year to make hosting Spaces available to everyone, it’s because the company has spent the last few months adding features that enhance the experience significantly. Twitter recently added a topics tool that allows you to add pre-defined tags to make your audio room easier to find. It also recently added a co-hosting feature you can use to recruit people to help you with moderation. Those are all things that should make Spaces more appealing to first-time users.